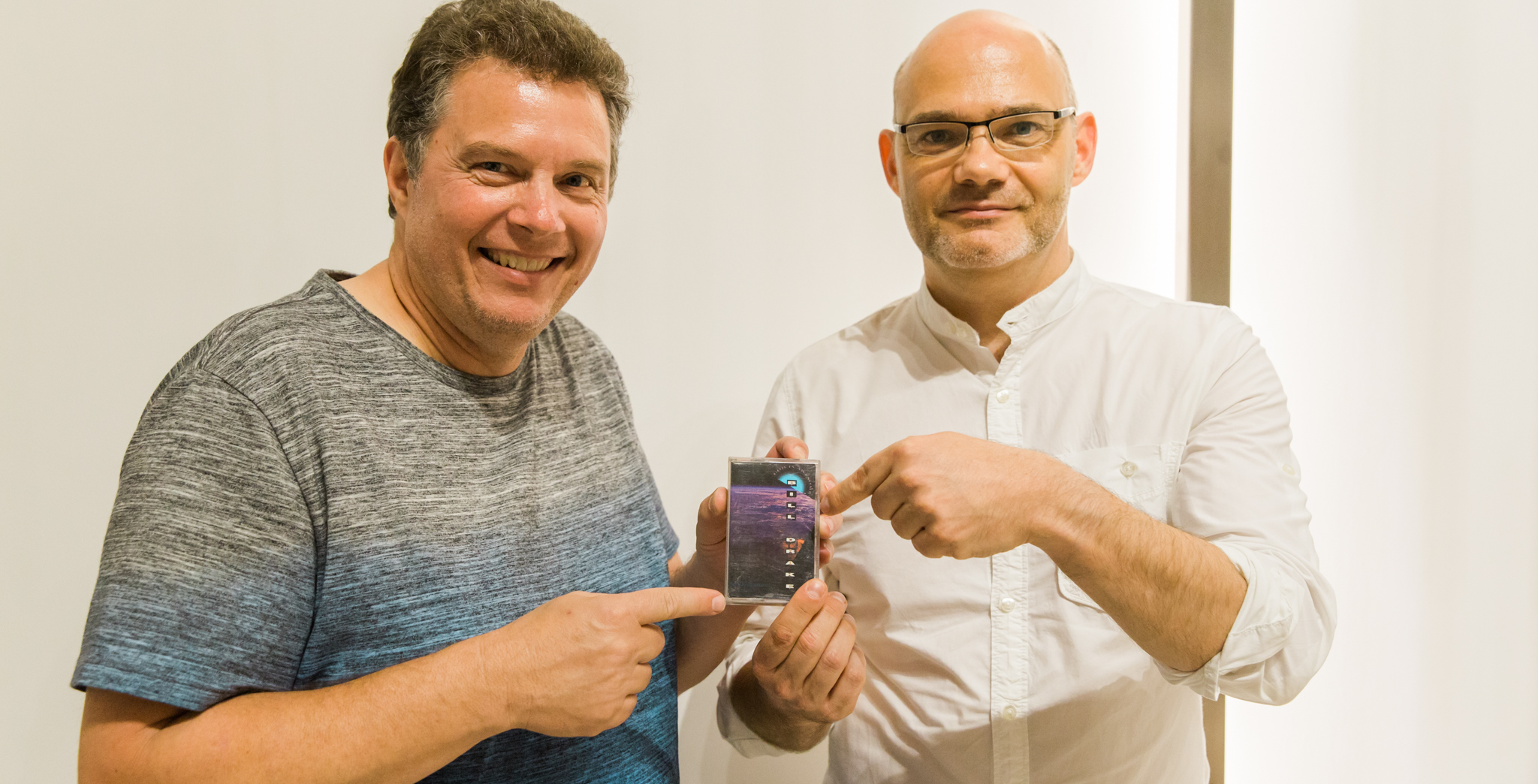 A very cool thing, 25 years in the making, happened yesterday in Ujpalota (Wee-pal-oat-a = "New Palace) a suburb of Budapest, Hungary.

The Pastor there, Gabor, met us with such enthusiasm! We found out that he had been following OM for many years. He is the man who discipled Attila Kapoc, the current Field Leader of Operation Mobilization in Hungary, when Attila first came to Christ many years ago. Gabor’s church building is brand new, and he was so excited to host us in his modern facility.

As he was "briefing" us on the church, the upcoming concert, etc., he pointed us to a shelf that held a "Bill Drake Band" Cassette (!) that he purchased at a Bill Drake Concert in 1993, shortly after the Iron Curtain came down.  He said it was the first contemporary Christian album he had ever bought - and he even had it signed by the author!

It was amazing to see a cassette of mine from 25 years ago, still intact, bearing my signature, and well-worn.  But I was not ready for the "rest of the story", which Gabor shared at the end of our concert when he came forward to wrap everything up.

As the concert was about "Legacy", he got up and shared personally about his own story of following Jesus, and how The Lord called him into the ministry, when he was visiting St. Andrew's in Scotland in 1992.  He returned to Hungary and went into seminary, but found out quickly that it was more like "cemetery", where many men had their faith shipwrecked.  He himself was ready to quit.

Then Gabor was invited to an OM Concert, where he heard an artist called "Bill Drake", and he was captivated by the deeper lyrics translated into Hungarian, and the testimony of a transformed life - from rejection to fatherhood, from suicidal to missionary.  He especially liked the song "I'll Obey and Serve You".  This prompted him not only to buy the cassette, but also to re-commit his life to ministry and pursue the pastorate, regardless of the "hot mess" that the reformed seminary there was or had to offer.

And here we were 25 years later:  the same artist now stood in Gabor's brand new church, where under his leadership, by Hungarian standards we were witnessing nothing short of a miracle - vibrant congregation growing like crazy had built a brand new building for the glory of God to service the local community there in "New Palace".

And there was Attila, the young man he discipled, now the Leader of OM in Hungary, bringing to Gabor's church the artist Bill Drake who brought Gabor the song that encouraged him to recommit his life to following his dream of being a Pastor one day - all in the same building.  The convergence was nothing short of God-wrought.

The concert went extremely well.  The Gospel was preached, people were impacted, tears were shed - all in all an awesome experience.  But I walked away in dumb-struck awe, at how the God of the Universe rolled back the curtain for just a moment, for me to see how a difficult trip from England to Hungary in 1993, had a significant role at a critical juncture in this Pastor's life, which ended up discipling the future leader of OM in Hungary, and leading to his building of a church and a congregation that is making huge impact in this part of Budapest.

What is so cool about this Brian, is that you are part of this - I would never have been able to go, if you guys were not supporting us, holding the lifeline, in prayer, in finance, and in partnership on the Mission Field, wherever God calls us to go.

So thank you.  And thank you from Pastor Gabor.  The look on his face when I presented him with the brand new CD that has the new version of "I'll Obey And Serve You" on it - was priceless (Legacy – The Mission).  He beamed, full of joy, as obviously the Lord reminded him again that He holds all of these things in His hands, and nothing we do for the Lord goes un-noticed.  Hallelujah!